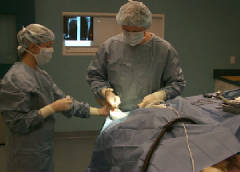 What procedure should be performed to repair a ruptured cranial cruciate ligament?

This question has continued to be the hot topic of the last several ACVS Symposium meetings. The commonly performed cranial cruciate ligament repairs today are the TPLO (Tibial Plateau Leveling Osteotomy), TTA (Tibial Tuberosity Advancement), and lateral fabellar suture imbrications. The fibular head transposition has fallen out of favor, as well as the intra-articular repairs that are commonly performed in humans. A “new” technique is the TightRope repair. The problem with comparing the different procedures is a lack of controlled clinical trials and the fact that there isn’t a good objective measure to compare the procedures. Typical measures comparing procedures have included pet owner or surgeon evaluation/happieness with the outcome, goniometery (measuring the joint angles), force plate evaluation, and kinesiology. Subjectively, we feel these measures to not demonstrate the full potential of a patient at full performance, like field trial or agility. SUBJECTIVELY, TPLOs and TTAs will consistently get dogs back to an athletic performance level; lateral sutures will not consistently do this 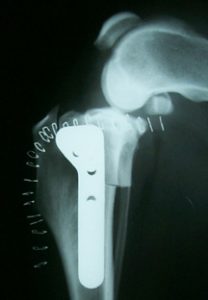 There are still no large scale clinical studies on the Tibial Plateau Leveling Osteotomy (TPLO) procedure. The following recommendations are based upon years of experience with the procedure by Dr. Huss. Dr. Huss started performing the TPLO procedure in 1997, and currently has performed over 14,000 TPLO surgeries. The TPLO instrumentation and implants are now manufactured by many companies and have expanded to at least 4 different size bi-radial saw blades (14, 18, 24 & 30 mm radius) and 6 different size plates (2.0, 2.7, 3.5 mm mini, 3.5 mm, 3.5 mm broad & Jumbo). This range of sizes permits a surgeon the ability to perform the TPLO procedure on animals ranging in size from approximately 10 pounds to over 250 pounds. The smallest size TPLO plate (2.0 mm) is equivalent in size to human finger plates. The tiny plates are even more technically demanding to implant than the already demanding standard (3.5 mm) TPLO. Each year more and more basic science research has validated Dr. Slocum’s recommendations and research on the TPLO. There is no longer a question as to whether the procedure works. The big questions now are 1.) Is the the TPLO better than other techniques and 2.) Which patients benefit from the TPLO procedure. Having performed some of the largest numbers of TPLO procedures, we feel qualified to make the following recommendations based upon our experience:

There are even fewer clinical studies on the Tibial Tuberosity Advancement (TTA) procedure. The procedue was developed in Switzerland after the political fall-out of the TPLO. The procedure results in changes in force in the stifle that eliminates the need for the cranial cruciate ligament in a similar manor as the TPLO. The most recent studies are showing similar benefits to the TPLO. The complications are different than the TPLO, but there are new complications related to this specific procedure. The early reports were that the procedure was easier to perform that the TPLO, but that doesn’t appear to be the case. The TTA instrumentation and implants are now manufactured by many companies and have multiple sizes and metallic make-up. There MAY be problems using this technique on giant breed dogs due to implant size constraints. All-in-all, the TPLO and TTA are comperable procedures. We have elected to continue performing just the TPLO procedure since we are intimately familiar with all of the subtle issues involved with this technique

For many years, the lateral fabellar suture had been the gold standard for cranial cruciate ligament repair in small animals. Originally described by Dr. DeAngelis, and then modified by Dr. Flow, the technique has recently had many different options made available for the type of suture that can be used. The lateral fabellar suture is a stabilizing technique that is outside the joint, but under the muscles of the knee. The suture material is supposed to approximate the pull of the cranial cruciate ligament going from the tibial crest to behind the lateral fabella of the distal femur(Dr. Flow also put a suture medially). The technique will stabilize the joint, but it can be very binding. Nearly every technique will losen fairly quickly after surgery. So the patient needs to put scar tissue down around the joint before the suture losens. Large diameter braided suture material was originally used as the suture of choice. There were many complications with infection, bacteria lodging in the braids of the suture. Large diameter monofilament nylon is now typically used, starting with fishing line; there are now several sources of nylon specifically made for this procedure. Recently, newer kevlar materials have been made available as the suture. Metallic crimps have also been developed in place of tying the suture in a knot. These techniques are relatively easy to perform by family veterinarians and boarded surgeons. We have found, however, that there are many subtle technical issues that have to be addressed or there will be problems.

This is a newly developed extra-capsular suture repair technique for cranial cruciate ligament ruptures. There are few published reports in the medical journals on this technique. The technique uses newer materials (kevlar suture) in a novel pre-formed implant. The method can be done through a limited approach to the joint. The end result is very similar to a fibular head transposition with the suture material going between the tibial crest and the lateral aspect of the distal tibia. Since over 50-70% of patients with ruptured cranial cruciate ligaments also have meniscal injuries, the interior of the joint still needs to be visualized. This can be done minimally invasively with arthroscopy. Otherwise, the technique could be performed open. At ProFormance Canine, Inc., we are always looking to explore better ways of treating our patients. We will keep you informed on this technique as more information becomes available.

Recommendations Based Upon Patient Size

The preceding statements are based upon our years of experience with thousands of TPLO procedures. From our first TPLO (a Bull Mastiff who went on to a CDX obediance title) our goal was to duplicate Dr. Slocum’s technique as precisely as possible. Our hope was to achieve the same success he had reported. We have been able to do that. Over the years, we have made very slight modifications to the technique based upon problems or issues we had found with the way our patients had responded.

Font Resize
Contrast
Accessibility by WAH
Call Us Text Us